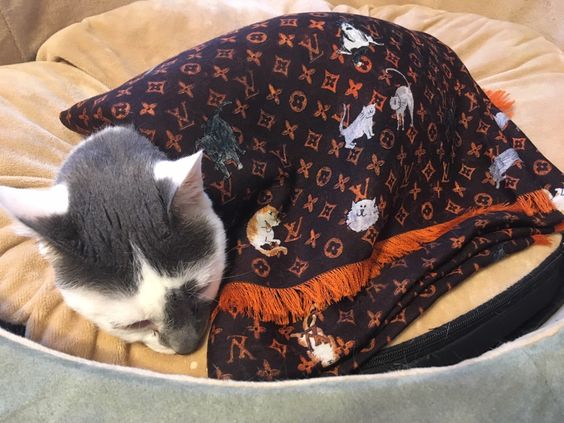 This past Thanksgiving was very busy in my household. The house was full of relatives and I got plenty of unwanted attention. They all left early the next day, and at breakfast I started feeling really sick. I love food, but I just couldn’t finish all my wet food. My stomach felt all knotted up.

My mom had taken off with my grandpa to drive him back home to Wisconsin right after breakfast, so it wasn’t until that night at dinner that my dad realized I was ill. He put a bowl of food in front of me and I took a few bites and then left it. My dad called my mom immediately and told her I wouldn’t eat my food. She freaked because she knows I have a history of urinary and bladder issues and a trip to the vet was inevitable once she got back from Wisconsin.

She arrived home the next morning and proceeded to check me out for herself. She gave me some wet food that she knows I really like and I ate about a quarter of it. But within a few minutes I barfed it all up. She reached out to a veterinarian friend who promptly told her I need to be monitored very carefully and if I get worse… go to the emergency vet as soon as possible. Mom was hoping and praying she could hold off taking me to the vet until Monday morning.

I hadn’t used the litter box in more than a day which was also unusual, so when I went to use it my mom invaded my privacy and watched me do my business. I did it and peed out some blood. That was it! Mom called several veterinarians who happened to be open. Unfortunately they had booked schedules and all of them told her to take me to the emergency vet. She was so torn about it. If she waited till Monday she could save a ton of money and avoid the high costs of an emergency clinic. But that was a day away and she didn’t think she could stand the thought of me suffering with vomiting and other issues.

She ended up driving me to the nearest emergency vet clinic, which was about 45 minutes away. She wasn’t upset at me for being sick, but she was frustrated at the thought she was going to have a very expensive, unexpected vet bill coming her way. She had been saving her money to buy a piece from Louis Vuitton’s Grace Coddington Catogram collection but now that purchase was in jeopardy. (Grace Coddington is a former Vogue fashion editor who designed a collection of adorable handbags, clothes and accessories that featured her two Persian kitties, Pumpkin and Blanket. Did you know Mummy loves Louis Vuitton and cats?  The Catogram line was a must-have for her personal collection.)

We got to the vet clinic where we ended up waiting to be seen for three hours. There were so many dogs and cats ahead of us, all with similar issues. Finally, we were called and I proceeded to bully the doctor and the veterinary technicians. I hissed at them and got in their faces, which in turn caused them to be scared of me. At that point they told mom they would need to knock me out for them to get a good look at me. She groaned at me and I knew exactly what she was thinking, “even more money for this visit because my cat is a brat.”

Of course I didn’t care because at that point I was mad as hell about being there. They took me into this back room and the next thing I know I am waking up feeling a bit groggy. I don’t remember much about checking out of the clinic, but I do remember my mom cursing that this visit cost a whopping $650.48. We got home and we both went straight to bed.

It turns out I had gastroenteritis, which is the inflammation of the stomach and intestines, just another thing to add to my list of ailments, which include:

For a few days I ate some bland food… boiled chicken and brown rice. Not delicious at all! I was super excited when I got my old food back. My tummy is back to normal and now I have no more aches and pains.

Momma still says she loves me despite my mental and physical flaws. She has no regrets about taking me to the emergency vet and spending her handbag money. It gave her peace of mind to get me the care I needed right away. Having the handbag budget actually worked out perfectly because she had money readily available so she wouldn’t have to put it on a credit card. She recently decided she should have a separate veterinary expense savings account in addition to a luxury fashion savings account.

I got a scarf

It all ended up being ok, because it’s not like she had to have a Louis Vuitton bag. It was just a fancy thing she wanted. There will be other cat-adorned luxury handbags to covet in the future. And, by the way, she went to the Louis Vuitton store and saw the handbags in person…she actually liked the scarves better so she got one of those instead, which fit perfectly into her reduced budget. When she got it home, she accidentally left this very expensive scarf on the bed, and I proceeded to roll around on it. Now, it’s my piece of couture and she’s not getting it back.

All in all, a fabulous ending for a trip to the vet.