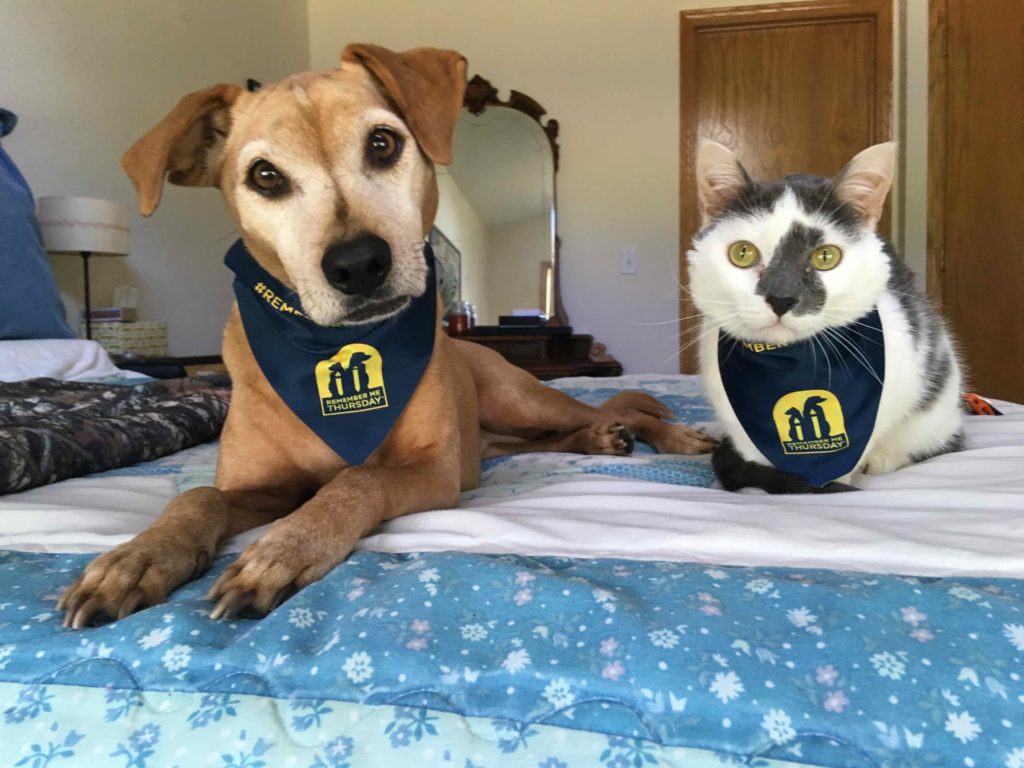 There are so many things you can do to help homeless animals. Did you know Thursday, September 24 is a pretty special day for me and my canine sister Josie?  We’re both former rescue animals who once were homeless. Thursday is the eighth annual Remember Me Thursday® event and we’re participating! The day unites animal lovers and pet welfare organizations. The hope is to be an unstoppable, integrated voice for orphaned four-legged friends.

The event shines a light on the millions of healthy animals who are still awaiting adoption. Remember Me Thursday® encourages communities to promote adoption so we can reduce the millions of animals euthanized each year. It’s the brainchild of the Helen Woodward Animal Center just outside of San Diego, Calif.

My sister and I are former orphans

My sister Josie has a unique adoption story. She still remembers the day a rescue group in San Antonio, Texas brought her to safety. Covered in mange, an awful skin disorder, she wandered the streets for weeks by herself.  Knowing there was little hope of finding a home for her in Texas, the rescue group brought her to a Minnesota rescue organization, where she sat for two years before finding a home. A volunteer with the group told my humans about her, and how she suffers from being shy and fearful. When mom saw her, she fell in love. My dad was a little more reserved about adopting a special needs dog. He ended up being her “person” and the one to help her overcome her trust issues. They gave her the permanent home she had previously only dreamed of.

I was different. A gentleman dropped me off at our local shelter after I survived a horrible overnight rainstorm. At only two weeks old, my kitty mom left me and never returned. When my human mom first saw me, she knew I was it. “That’s Farley Waddlesworth,” she told people at the shelter. After being bottle fed for six weeks by mom’s friend Laura, she adopted me.

Remember Me Thursday® began in 2013 and is supported by 180 countries through thousands of pet lovers around the world.  Many communities are holding candle-lighting ceremonies to call attention to the needless euthanasia of healthy and adoptable animals. Lots of stars are even getting in on the activities: Bethenny Frankel, Diane Keaton, Katherine Heigl and dozens more, who are all going to use social media to share the message.

What can you do to help?

The event’s organizers would like you to talk about pet adoption by tweeting, tagging, posting or sharing something about pet adoption. Use the hashtag #RememberMeThursday.  Also, upload a photo of your rescue pet to the #RememberMeThursday Photo Wall, where you’ll have the chance to win funds, food, and toys for a shelter or rescue of your choice. For more information, go to www.remembermethursday.org.

Raising awareness is the only way to end euthanasia. Help get homeless animals into permanent homes. When there are no more homeless animals, life will be even more Whisker Fabulous!